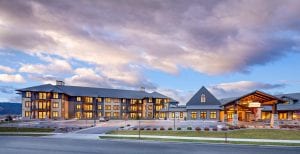 KALISPELL, Mont. — Millions of COVID-19 vaccines have made their way around the country to people in the 1A and 1B group. But it’s not the same story at for residents at Immanuel Lutheran Communities in Kalispell.

The facility says a timeline showed they would get their first shipment from CVS in late December, and the second one was scheduled for mid to late January.

But it’s almost mid-January, and officials say residents won’t get their first vaccination doses until Saturday.

Immanuel Lutheran says the delay has something to do with CVS’s mile radius cap.

“A gentleman from CVS told me there were 102 buildings that they had contracted with that were 75 miles in their furthest CVS, and so I think we fell through their planning cracks,” Immanuel Lutheran Communities chief operating officer Carla Wilton said.

We reached out to CVS and haven’t heard back yet.

The Flathead City-County health officer says since pharmacies are a federal partner. The department doesn’t have much information.

Wilton says long-term care residents at The Retreat at Buffalo Hill and Skilled Care Center will be vaccinated first.

A group of four CVS workers will go from room to room and vaccinate the residents. She says there will also be a common room for staff to get their vaccinations.

The assisted and independent living residents and staff will be vaccinated the following Saturday.

“It’s been frustrating getting the clinic scheduled, for sure. It felt like it took longer than it should have,” Wilton said.

Wilton says 179 Immanuel Lutheran residents have signed up to be vaccinated so far. They’ve had one resident say no.

Click here to watch the news feature and read the full article.