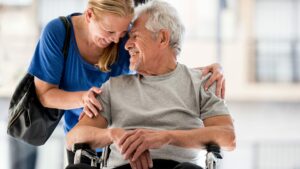 Dementia refers to a loss in cognitive functioning that impacts a person’s abilities to complete daily activities.

If you or a family member are experiencing possible symptoms of dementia, it’s important to contact a medical professional for evaluation. A doctor will review your medical history and symptoms and run tests to assist in diagnosis. In addition, an individual must meet certain criteria, such as impaired language, judgment, attention, functioning and more, to be diagnosed.

There are various types of dementia, with some being more common than others. Alzheimer’s disease is the leading cause of dementia, accounting for 60 to 70 percent of all cases. People are affected by dementia differently, and it’s important to understand the condition if you, or a family member or friend, have been diagnosed.

Individuals with dementia may struggle to complete daily activities such as cooking meals, keeping track of belongings and traveling outside of their neighborhood. Some forms of dementia are progressive, meaning symptoms worsen over time. In some cases, dementia may be present long before any changes are actually noticed.

If you or a family member are experiencing any signs of dementia it’s important to speak with your doctor. This condition should not be associated with “senility,” or an infirmity people relate to aging. Memory loss is not an expected component of getting older.

Symptoms of dementia vary from person to person. However, there are common changes a person or family member may notice if a person does have the condition. These include, but are not limited to, the following:

A medical professional will look for two or more of the following functions to be impaired, and negatively impacting a person’s daily life, when diagnosing dementia:

There are circumstances where a doctor will be able to diagnose an individual with dementia, but unable to determine a specific type. In these situations, a person may be referred to a neurologist for further testing.

Treatment methods for dementia include, but are not limited to:

Your doctor may prescribe medication to improve dementia symptoms, such as cholinesterase inhibitors, which help boost memory and judgment.

For more awareness about Dementia, read this “Understanding the Person with Alzheimer’s” by Jolene Brackey.

Understanding types of dementia, treatment and causes is important if you or a family member are living with the condition. Below you will learn about three of the most common types of dementia and their differences as you explore supportive care options.

The most common type of dementia, Alzheimer’s disease, is progressive and incurable. Typically, an individual will begin experiencing symptoms after the age of 60. However, the disease is often present long before symptoms are noticeable. Alzheimer’s can take 8 to 10 years to progress to its worst stage. The goal of treatment is to slow this progression.

Symptoms of Alzheimer’s include memory loss, difficulty solving problems and completing tasks, trouble with writing and misplacing objects. This form of dementia is the sixth leading cause of death among Americans.

Symptoms of vascular dementia include disorientation, vision problems and confusion. Depending on which area of the brain is affected by insufficient blood flow, memory loss may also occur.

Dementia with Lewy bodies (DLB) is caused by an abnormal buildup of proteins, known as Lewy bodies, in the brain’s cortex. Lewy bodies lead to damage in areas of the brain responsible for functioning. DLB is a progressive form of dementia, and treatment aims to reduce symptoms.

Symptoms of DLB include hallucinations, difficulty walking, sleep and mood changes and memory loss. Lewy bodies can also be present in other brain disorders.